This is going to be a hard one to  believe. But I assure you it actually happened just as I’ve described below, and more.

It’s important to know I virtually was never alone during the many encounters I experienced from two or three years old (1939 1940) until my last overt encounter that occurred in August of 1986…age 48.

During a few of these encounters boys and men were knocked to the ground by something we couldn’t see. This happened 1) I recall clearly when I was a teenager on a hay rack ride along Salt Creek northeast of Lincoln, Nebraska — early 1950s; 2) I recall clearly when I was 21 years old working at a uranium mine in the Gas Hills near Riverton, Wyoming — 1958; and 3)+ possibly, or more accurately most probably, during a few other encounters of which I can’t quite recall all details.

What was equally astonishing was the fact that some boys and men got unreasonably, even extremely excited when the craft showed up. They especially got excited and aggressive when the voice began to speak. You could say they went crazy, out of their heads so to speak. In a few of these cases a couple or more of the boys and men began to challenge the craft, most often the small discs with the two headlights. During these episodes the discs would hover and move in various directions in the local area, from about three to seven feet above the ground. A boy or man would run and yell at them and a disc (or discs) most often would move off  just ahead of them, the boys or men chasing the discs. Then at some point a disc would turn and move swiftly toward a boy or man. The boy or man would then turn and run in the other direction until the craft stopped and turned around. It would then move off some distance away again…and the boy or man would once again turn and run trying to challenge it or catch it…and so-on back and forth for a time.

This routine would lasted for several to many minutes and at times there were two, three or more boys or men playing what seemed like this game of tag with that many discs, but without touching. Then, if a boy or man became too aggressive with nasty verbal and body language, the craft would move toward him with the voice loudly espousing the same or equally nasty comments. And at times, as above, I saw a boy or man knocked to the ground by something we couldn’t see. This was when the craft was not up close to the boy or man. I saw the boy or man fall to the ground as if he were struck by an invisible being who spoke and yelled words in perfect English. In two of the encounters described below several men were involved. In two of the encounters a was gun involved.

When I first saw the video below (at the bottom of this article) of the girl falling, after being hit by what seems to have been an invisible force of some kind, I immediately thought of these encounters that had occurred in my past. 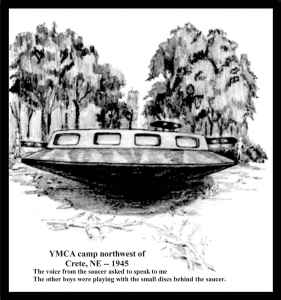 Boys playing with and chasing the discs with headlights behind the windowed saucer…YMCA camp Summer 1945. I didn’t see anyone knocked to the ground, but the boys got extremely excited when the craft showed up at various times during my entire four or five days at camp. I was 7 years old. See the story in the book Eminent Discovery Volume 1.

(As a side note, this is one my drawings of the windowed saucer. It is nearly exactly the same as a drawing sketched by a tribesman in South Africa…a half a world away. See the rest of the story in Appendix A of the book Eminent Discovery Volume 2. This strongly supports the validity of my recollections and supports the fact that at least one of the UFOs I encountered indeed was/has-been interacting with other people around the world for many, many years.)

The discs played what seemed to be a game of tag (without touching) with my cousins. My cousins “went wild”…at the falls southeast of Lake City, Colorado, Summer, about 1952. The story is in Eminent Discovery Volume 1. 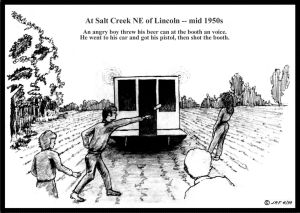 At Salt Creek during a hay rack ride northeast of Lincoln, Nebraska, Fall, about 1953.

The boy arrived at this site after the booth was deposited on the ground by the windowed saucer. He cussed and yelled at the voice who was speaking to the rest of us (about a dozen high school students). He was drunk and began swearing and threatening the voice. He said he was going to go to his car and get his pistol and kill the booth and voice. He did get his gun and returned near me, again threatening the voice who also admonished him. His weapon went off but he was instantly knocked to the ground by something we couldn’t see. As he lay there on the ground near my feet, the voice verbally admonished him with more forceful language than the boy had previously spoken (yelled). The rest of the story is in Eminent Discovery  Volume 1. 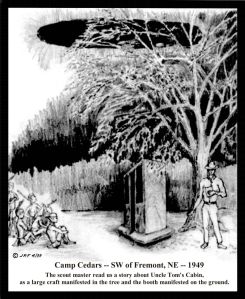 This occurred at a Boy Scout  camp just  before we boys and the disc-shaped crafts with headlights played a game of tag in an adjacent field. The boys got crazy/excited. However, I can’t recall for sure if any of them were knocked to the ground. After I watched this for a time, I tried to chase a disc, but the disc turned and moved very slowly up in front of me, the voice espousing one of the usual routine calm messages. We all then began running, completely out of control toward our campsite…south of the Platte River south of Fremont, Nebraska, August 1949. Read the rest of the story in Eminent Discovery Volume 1.

(Notice the craft hovering among the tree branches as the scout master read his story. This indicates that the craft was only semi corporeal. Yet when we hit, kicked, and got into the booths and some of the other crafts they appeared to be very solid, three dimensional realistically solid with hardness.) 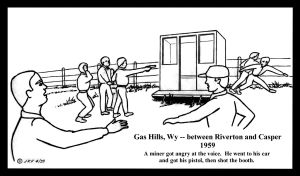 One of the miners threatened the voice with his pistol. He said he would kill it if it didn’t leave the area (or something similar). We then moved to an open area west of the uranium test pit that we were excavating. The sun had already set an hour or so previously. The small discs with headlights showed up and the miners began chasing them, yelling fowl language as described below. 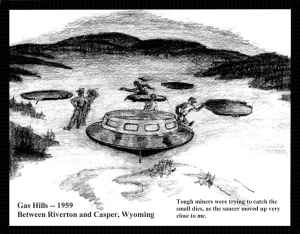 After things somewhat settled down, the windowed saucer approached within a few feet of me, about chest high, then more softly began speaking one of the more routine formal messages. I was standing by a couple of our mining foremen. They asked me to move up very close to the windowed saucer — as the voice continued to speak. The foremen then began to make statements saying I somehow, in some strange way, must be responsible for the entire ordeal.

Even though I don’t clearly recall, I have deep feelings to suggest boys and men being knocked to the ground by something unseen occurred during several other encounters, especially during the late 1940s and 1950s.

Here is the video that was posted on Youtube.com recently. Whether the video was real (the girl being hit by an unseen force or wire) or whether the video might have been faked or altered, the girl falling was very similar to how I saw the boys and men fall. Yet, those boys and men who I saw fall to the ground did not fall as violently as the girl did in the video.

Up until 1986, at age 48, I could recall some strange things that had occurred from my very early childhood…but I really couldn’t understand them. Then in late 1986 through early 1987, in a very short time, I recalled, in extreme detail, an enormous number of so-called UFO encounters that had occurred throughout my life. Needless to say, I became almost totally devastated; my entire life was turned up-side down.

A few witnesses have since recalled some of what I recalled, enough to convince me and them I am not psychotic or imaginative. In other words, believe it or not these unbelievable things actually happened.

I have spent the last 30 years researching, writing and trying to understand. As a result of my intense efforts, I now can offer you three books and a website (http://www.johnfosterufos.com) to help you and humankind try to understand some of the hidden mysteries of life and UFOs.

The mysterious intelligences connected to my encounters have told me that they are “the monitors and Keepers of the earth” and are responsible to a hierarchy that includes “the arch angels Michael and Gabriel,” who are responsible to the entity we have know as “Christ,” who is in charge of this corner of our immense complex universe.

They explained further that they are not allowed to interfere in the affairs of humankind except at certain times, when things are going awry or are dangerous. They said this is one of those times, one of those eras. They continued to state that if they hadn’t interfered in the past, we would have destroyed ourselves…and that if they don’t interfere now and in the future, we will indeed destroy ourselves.

Strictly for your own benefit, take a look at the information here on http://www.johnfosterufos.com and read the books I’ve written in order to understand in some detail what this is all about. The website and books can give you insight into how so-called UFO encounters have affected our sciences, religions, and history…and how they most likely will affect our future.