Brandon Fugal is the owner of Skinwalker Ranch. As the Chairman of Colliers International in Utah, Brandon is one of the most prominent businessmen and real estate developers in the Intermountain West. From an early age, he has also been fascinated with the mysteries of our universe and the question of whether or not we are alone. In 2016, Brandon purchased Skinwalker Ranch from aerospace tycoon Robert Bigelow in order to investigate and study the strange and unexplainable phenomena that has been reported there for more than two centuries.

Alejandro Rojas: When was it you first heard about the ranch and what is it that you heard?

Brandon Fugal: The ranch was first brought to my attention when I was at Barnes and Noble, back in 2006, and saw Dr. Colm Kelleher and George Knapp’s book The Hunt for the Skinwalker on the shelf. I actually bought it and read it on the weekend. I found it to be very interesting. And that was about it.

I read the book, found it interesting, especially as it relates to being a Utah property and, you know, a very intriguing account of strange activity not far, just hours, from where I live. But upon finishing the book, I put it on the shelf and didn’t really think about it any further until 2015 when I was contacted by two of Robert Bigelow’s science advisors with the question as to whether I would be willing to entertain a potential joint venture or acquisition of the property for the purpose of advancing the research beyond what Mr. Bigelow had done for 20 years. I had developed a good relationship with these science advisors through another effort that I had been involved with a decade ago.

They had a high degree of respect for me, thankfully, and confidence that I would be a worthy successor to Mr. Bigelow’s interest in a program regarding the property. I quickly agreed. I was intrigued and quickly agreed to meet with Mr. Bigelow to discuss a potential joint venture or acquisition of the property. I flew down to Las Vegas to meet with he and others, including Dr. Kelleher, to discuss not only the history of the property and their investigation, but a new structure moving forward. Upon meeting them, I disclosed to them that I was approaching the topic as a healthy skeptic and that I had never seen a UFO, ghost, or anything of the sort. And that I believe that there was most likely a natural prosaic explanation for what had been reported in the book and on the property.

They were amused and shared with me the reality of what their investigation revealed. They also disclosed that the ranch had been part of a five-year Pentagon black budget program studying the UFO phenomenon and that, although the results of that investigation remain classified and confidential – how do I say this? The phenomenon is real. It was interesting, so we took the discussion forward. I had my attorneys work with his legal counsel and in April of 2016 I acquired the property.

I first saw the property one week before closing on the purchase, flying in on my private helicopter with Jim Morris, who you see on the History Channel series as the ranch manager. I have had a long relationship with Jim Morris in that he was my first big commercial real estate developer client when I was 18 years old, back in 1991, when he was developing class A office buildings in our market. As a confidant and someone with military experience, I felt it was important to bring him with me to inspect the property for the first time and establish this new phase of ownership and investigation.

He also was very skeptical and had never seen anything unusual in his life that would qualify as a UFO sighting or paranormal experience. He has had a special relationship with the Indian tribes spanning decades, raising millions of dollars for scholarships and providing financial aid,  and his great respect for the Native American people has been a key part of our community engagement.

Rojas: So are you still as skeptical as you were about something unusual going on at the ranch?

Fugal: No. So people ask me all the time whether I am now a believer based on what we have seen and recorded during my ownership of the ranch. The honest, most direct answer I can provide is that I am not a believer. I am an experiencer. I know for a fact that it is real and have witnessed with my own eyes, with other credible witnesses at my side, what can only be described as daylight sightings of exotic craft over Skinwalker Ranch.

Rojas: Do you mind describing one of those incidents?

Fugal: Yeah. You bet. For the first six months of my ownership and stewardship of the property, I did not personally witness or see anything unusual. But, six months into our investigation, I had an experience while entertaining a visiting dignitary and his security detail that involved an undeniable sighting of what can only be described as a 40 to 50 foot long silver, grayish disc-like object that performed maneuvers that were stunning and defy conventional explanation.

This was in broad daylight with multiple witnesses present. During that same afternoon, we experienced everything from our smartphones being completely drained from about 80% charge to zero to other electromagnetic anomalies, even acute medical episodes that attended the incidents that occurred on that fateful day. 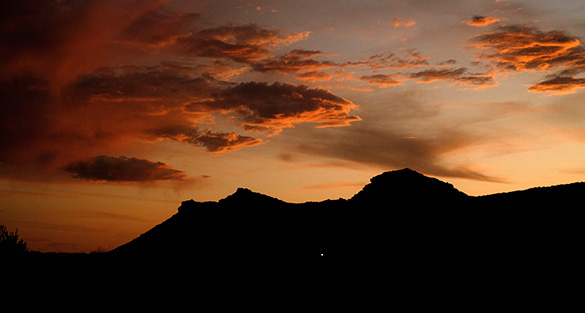 Rojas: Lue Elizondo, who worked on that Pentagon program that you had referred to earlier had stated that a lot of the pushback in the Department of Defense (DoD), and one of the main reasons they kind of pared it down to a UFO project, as opposed to the other paranormal phenomenon that they were looking at, is that there were a lot of insiders who felt what they were dealing with was demonic. Do you believe that there’s anything angelic or demonic related to the phenomenon going on at the ranch?

Fugal: Good question. I am asked on a daily basis whether I believe that what we are observing is extraterrestrial, inter-dimensional, or spiritual in nature. And my honest answer is “all of the above.” I believe what we are observing and documenting involves all of the above. I think there is a spiritual aspect to what we are encountering at Skinwalker Ranch. There are definitely malevolent and benevolent forces at work and we’ve had negative experiences from time to time that have resulted in people being hospitalized.

Rojas: Yeah. I talked with Travis Taylor about some of those incidents.

Fugal: Yeah. Travis Taylor himself. I mean, Dr. Taylor, he ended up going to the hospital with injuries that were difficult to explain.

Rojas: How did you feel about the results of the first season of the show?

Fugal: Very pleased. In fact, when we commenced filming the team for season one of the investigative series, I gave the disclaimer to the crew and the History Channel that you can’t schedule or conjure up the paranormal or strange activity. It doesn’t work that way. The phenomena witnessed on the ranch is transient in nature and unpredictable. So I was surprised when, during the first day of flying Dr. Taylor out to the ranch for the first time on the helicopter, within minutes, he and our team started seeing things happening that were unusual. And it only got more pronounced as days and weeks passed by.

We conducted a series of experiments over several months, including, rocketry, balloon, instrumented, balloon experiments, ground penetrating radar, resistivity studies, and other research. On every occasion, both our team and third-party experts and consultants involved, experienced unusual activity and events.

Rojas: When it comes to the first season of the show, is there one incident or investigation that stands out to you as being the most compelling or shocking to you?

Fugal: Yeah, the cow dying and upon investigating the body, having a number of unusual events occur. Those included multiple types of smartphones malfunctioning while in the presence of the dead animal, trifield meters going crazy, and then, upon reviewing the cameras, surveillance footage, seeing an unidentified flying object up there, above the animal, just before its death. It all combined to present some of the most compelling evidence of high strangeness on the ranch. I mean, I am often reminded that correlation is not causation. However, you cannot ignore a rapid fire combination of events, including electromagnetic anomalies, physical distress, and what can only be described as UFO activity occurring without giving it some credibility. We immediately brought to the site a veterinarian to study the animal on camera and he concluded that the animal died of stress induced pneumonia. The circumstances surrounding the rapid death of the animal and the correlating strange events continue to baffle the team. In addition, the fact that the animal carcass has remained untouched by any scavenger activity since, underscores how unusual this event.

Rojas: I’ve talked to some of the previous investigators and your investigators. Something they have in common is this thing called the, I think it’s been labeled, the hitchhiker phenomenon, where when you go to the ranch and have an experience, sometimes they’re having unusual experiences after that, in their own homes. Have you experienced that?

Rojas: I’ve even got to talk to a couple of the spouses who are not happy about that, the weirdness that they’ve experienced after these guys would come home.

Fugal: Well, it’s a known fact that numerous participants, including military operatives, refuse to ever set foot on the property again due to the negative experiences that they have had, including phenomena following them home. Even Mr. Bigelow has had experiences that have followed him, resulting in his refusal to ever visit the property ever again.

Rojas: Wow. So, season two. I know Dr. Taylor’s very excited about what they have found and been able to record for season two. Can you tell us a little bit about the amount of compelling stuff that we’ll be seeing in season two of the show?

Fugal: Absolutely. What you will see is a definite progression regarding our efforts and investigation. We take more aggressive measures to study not only what is below, but above the ranch with this new season, and bring to bear our advanced instrumentation in service to learning the secret of Skinwalker Ranch.

Rojas: I guess my last question, because we’re about out of time, is, how do your colleagues feel? How have they reacted to you buying this ranch and participating in this sort of research?

Fugal: The business community has been surprisingly supportive and I have had a number of executives reach out to me privately with their own experiences. I never intended to reveal my identity as owner of the most infamous, scientifically studied paranormal hot spot on the planet. But I elected to go public last year in order to present the fully transparent account of our investigation. And my stewardship, even though the effort at Skywalker ranch is a dramatic departure from what I focus on 95% of the time in my conventional business efforts, it is an inspiring and intriguing part of my life.